I would challenge you to find someone in this country who has not heard of the artist known as Banksy. The famously elusive artist has always attracted media attention due to his anarchic graffiti works that usually display the artist’s satirical sense of humour, with one of the most definable features of him being his anonymity. However, those of us in London have the opportunity to get a new and much deeper understanding of Banksy and his career thanks to The Art of Banksy: An unauthorised, privately owned collection.

The gallery is located on Earlham Street, a 3 minute walk from Covent Garden Station. It is important to note that this exhibit is not authorised or in any collaboration with Banksy himself. Instead this is one of the largest collections of privately owned “Banksies” that have been loaned to the gallery by their owners from all around the world. As an audience member to this exhibit and an aspiring Art lover I found this fact slightly morally dubious. Banksy is infamous for his want of privacy and disdain for capitalist and materialistic society. How could I go to an event that goes ahead without his consent for a gallery to make money off of his work? But it is by going to this exhibit that I learnt much more about the artist and his career, that made me feel less of a traitor.

Perhaps it was just me but I always thought of Banksy as an artistic criminal. That his art only consisted of illegal Graffiti that made controversial and often humorous commentary on the political and social issues of the time. But, due to the information presented to me I learned Banksy to be a bit more of a businessman. The collection is made up of mostly prints of his famous pieces such as Girl with the Heart Balloon, Love is in the Air (Flower Thrower), Monkey Parliament and many many more. Of which Banksy actually made 250 original prints for sale. Each piece is authenticated by the artist’s signature and what number it is out of the existing 250. These are sold and collected with Banksy’s consent and the help of his (now former) agent Steve Lazarides. Of course there is nothing wrong with an artists selling his work, he’s still got to eat, but it just doesn’t quite fit with the anti-capitalist vigilante image that is presented to us in the media

The exhibit itself is actually a very fun experience. Walking around the maze-like set up that takes place underground takes about 30-40 minutes to get through, if you do actually stop to read the information on the walls. The experience is also in a way narrated by Banksy himself with quotes from his book Wall And Piece printed across the walls that display his sarcastic and satirical sense of humour. The exhibit begins with a timeline of the artist’s career that now spans almost 20 years. 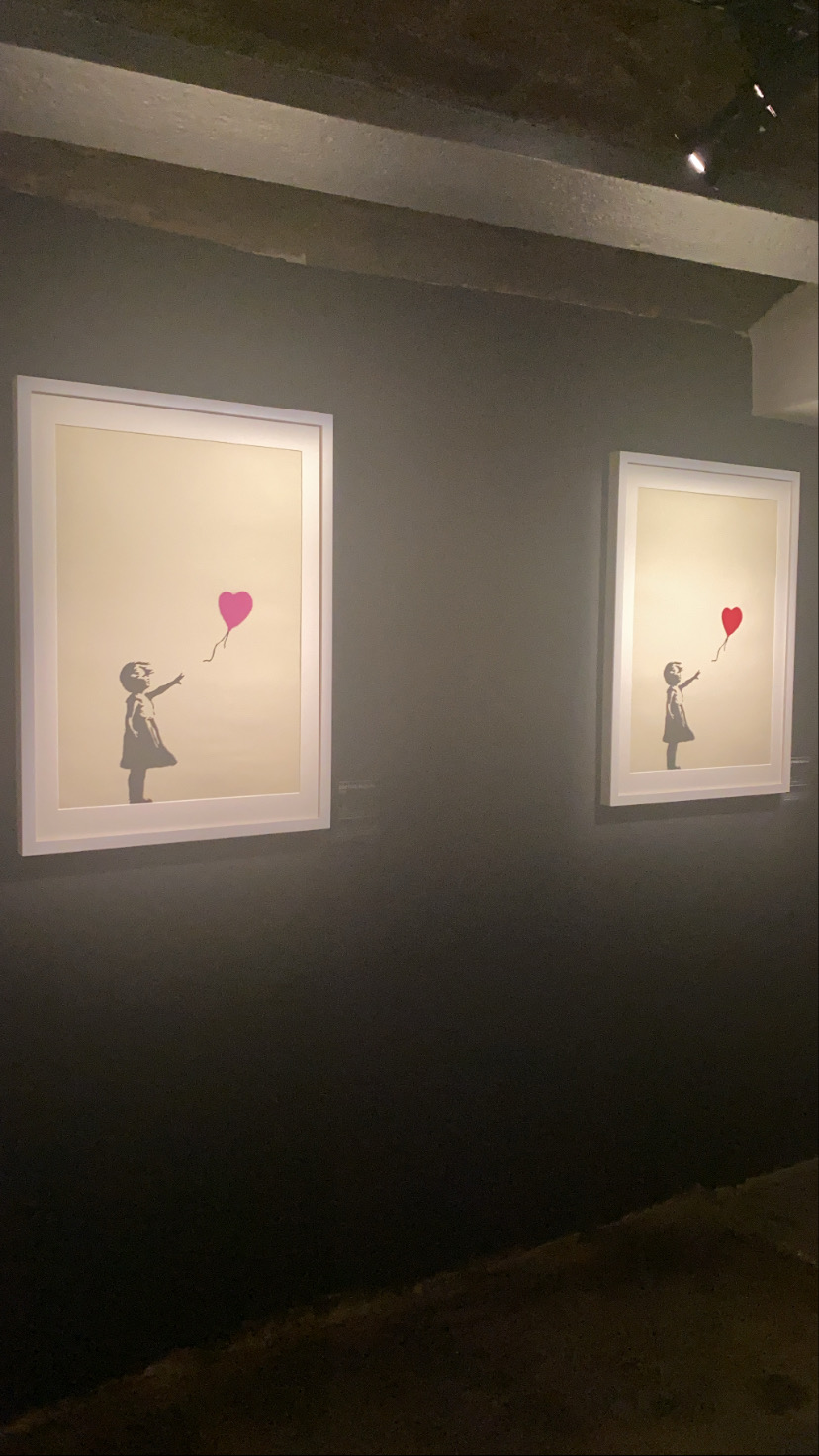 Learning of the artist’s long standing career is fascinating. Seeing his works on designing album cover artwork for small bands in the 90’s and publicity jobs with charities such as in Greenpeace’s Save or Delete campaign in 2002 ,gives audiences a better understanding of the artist’s journey and what he stands for. A piece I found particularly funny from his early career was an album cover in which Banksy is actually photographed in it. Don’t get too excited though, the artist maintains anonymity but you can see him from behind as he spray paints on a wall behind the band’s members.

The exhibit is running until the 21st of November and tickets are assigned in time slots in order to help a better flow of audiences. The cheapest tickets are £19.25 for students (student ID required) and 6-18 year olds, all on weekdays only. The gallery is operating with good Covid-19 etiquette;  temperatures are checked, masks are worn and a one way system is in place.

Harper’s Bazaar says “it isn’t one to miss”- of which I would have to agree, if you are a Banksy fan. Or if you’re simply curious about the artist and how contemporary artists in general are able to maintain a career and want humorous stylised information, then I would definitely recommend it aswell. The gallery is set up in a way that captures the personality and controversial sense of humour that Banksy displays through his art perfectly. You will leave with a sense of urgency to question your society and government, about everything! And if that is not what Banksy represents then I don’t know what is!